Not all emergencies call for getting out of town fast.  In some cases the emergency is more of a shelter in place scenario.  That means ensuring you have many essentials handy for what might be an extended period of disruption.

One of those disruptive events might be a loss of municipal drinking water.  It’s even possible that a functioning water system might be transporting water that’s unfit to drink, so having some good fresh water as an emergency backup is important.

If you have water delivered in 5 gallon jugs for a water cooler you’re already ahead of the game.  Having a few more full jugs queued up can provide a bit of a buffer until an emergency situation abets. 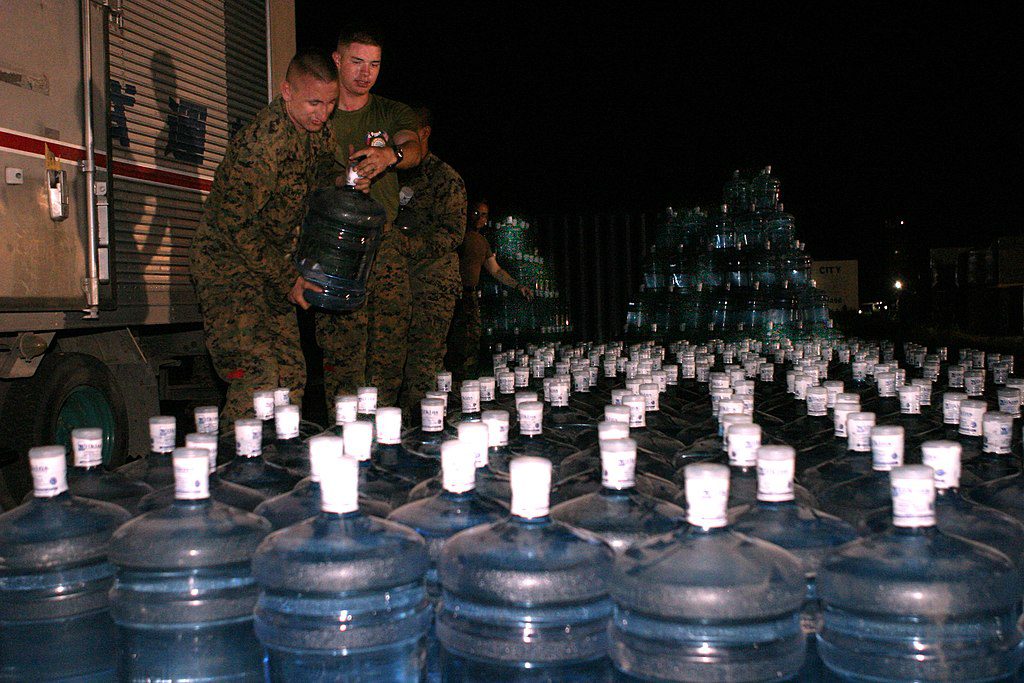 Your water delivery guy may wonder what you’re up to.

It’s important to make sure you cycle through those jugs in sequential order, using the older jugs first.

If you don’t get delivered bottled water or don’t want to mess with so many jugs there are some larger containers that can be used to store water on a longer term basis.  Twenty gallon plastic emergency water drums are a good balance between size and ease of movement.  No you won’t be carrying full containers, but they can be rolled around and tilted over fairly easily.  We have two such drums and bought them recycled at a discount.  The drums were used previously to transport soda syrup, so they had a bit of a rootbeer odor to them until we rinsed them and aired them out well.

With drums of water you’re not thinking of using them on a regular basis outside of an emergency.  You tend to fill them and then leave alone for extended periods of time.  How then do you ensure that the water doesn’t get unsafe?  I recommend using Purogene water treatment in the drums to ensure nothing unhealthy grows in the water over time.  According to the instructions on the bottle, 1 oz. of the product should be good for 30 gallons of water.

What does the water taste like with the added preservative?  I honestly don’t know.  I’ve never tried it.  But then, this water is intended to be used in an emergency when there is nothing else available.  Quick frankly, it doesn’t matter if it tastes good or not.  It just has to be safe.

How much water should you store per person?  Well, that really depends on how long the emergency lasts and how many people you need to keep hydrated.  So, it depends.  For my wife and I we maintain two 20 gallon drums of water in the garage in addition to the smaller emergency punches of water that are in our go bag.