The community of Glen Ellen, north of Sonoma, was hard hit by the 2017 fires.  Jack London State Historic Park was in the path of the rapidly spreading fire when the curators took quick and decisive action.  They loaded up irreplaceable artifacts from the site and shipped them to Sacramento for safe keeping.  How did they know what to do so quickly?  They made a list beforehand.

In a matter of two hours that first Monday morning, parks staff went room by room and cleared out items of importance indicated on a pre-made list, one created in the unlikely event of just such an emergency.

That’s effective prior planning.  Can you imagine the confusion and bad decisions that would have been made had they been forced to evaluate and prioritize in the chaotic moments when the fire was closing in on the site?

The contents of our houses are not as historically important as those from Jack London’s house but they are certainly important to us.  So why shouldn’t we plan ahead with our own belongings?

A recent bestselling book, The Checklist Manifesto, proposed the simple checklist as a solution to many complex problems we face in everyday life.  Airplane pilots and even surgeons have benefited from being able to follow well documented, complex steps in the form of a checklist. 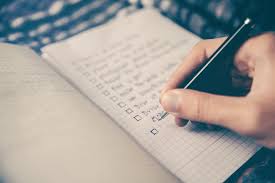 Though throwing things in a car to vacate a disaster area doesn’t require a medical degree or pilot’s license, it does represent a challenging and stressful situation.  What’s most important?  One must think fast, but the proper decisions to be made require a slower, more methodical thinking (Thinking Fast and Slow).  A checklist prepared beforehand provides the best of both worlds.

What should the checklist include?  It’s a simple to-do list of things to collect in the event of an emergency in priority order.  Construct this list and order it such that the most important things are listed first.  If you have a list of 15 items but only have time to collect 5 be sure that in the end you will be certain that the decisions made where clearly the right ones.

Do not shy away from having a long, detailed list.  Don’t think that you’ll obviously remember when the time comes.  You’ll likely remember your dogs or cats.  But what about some of their food?  Write it all down.

Online task managers, such as Remember The Milk, allow for the creation of lists in which items can be arranged in an arbitrary order.  This is handy because your ordering of items on the list is likely to change the more thought you put into things.  Once finalized, the list can then be printed out.  Place a couple of copies around the house to ensure that one can be found at a moments notice.

1 Response to Emergency Lessons – Make a List, Check it Twice